Welcome to our online companion for careful readers and teachers of Gerald Vizenor’s Favor of Crows: New and Collected Haiku. You will find analysis of Vizenor’s work, interviews with the poet, and other information that will further your understanding of Vizenor’s haiku.

In the introduction of Favor of Crows: New and Collected Haiku, Gerald Vizenor explains how he came to write haiku. “The United States Army, by chance, sent me to serve first in a tank battalion on Hokkaido and later at a military post near Sendai in northern Japan. I was eighteen years old at the time. Haiku, in a sense, inspired me on the road as a soldier in another culture and gently turned me back to the seasons, back to the traces of nature and the tease of native reason and memories. The imagistic scenes of haiku were neither exotic nor obscure to me. Nature then and now was a sense of presence, changeable and chancy, not some courtly tenure of experience, or pretense of comparative or taxonomical discovery.” He goes on to explain how haiku are similar to Anishinaabe dream songs, which “are about the presence of animals, birds, and other totemic creatures in experience, visions, and in memory. The same can be said about haiku scenes, that the visions of nature are the perceptions and the traces of memory.”

To order a copy of Favor of Crows visit the book page, here.

We are honored to have been able to include internationally celebrated Anishinaabe artist Robert Houle’s work inside Favor of Crows: New and Collected Haiku . You can learn more about Houle at CCCA Canadian Artist Database, the National Gallery of Canada, and Wikipedia. The photograph below shows Vizenor and Houle at the Smithsonian’s National Museum of the American Indian (New York City branch). They are taking in the exhibit Before and after the Horizon: Anishinaabe Artists of the Great Lakes. Houle’s work is included in the exhibit, and an essay by Vizenor is included in the exhibit catalog. 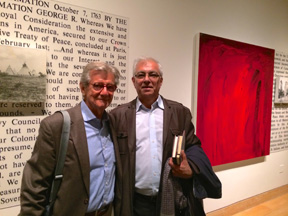 If you have any questions or experience problems with our site, please contact selliott@wesleyan.edu